An old man on the point of death summoned his sons around him to give them some parting advice. He ordered his servants to bring in a faggot of sticks, and said to his eldest son: “Break it.” The son strained and strained, but with all his efforts was unable to break the Bundle. The other sons also tried, but none of them was successful. “Untie the faggots,” said the father, “and each of you take a stick.” When they had done so, he called out to them: “Now, break,” and each stick was easily broken. “You see my meaning,” said their father. – Aesop, Fables.

October 24, 3:46pm. The elongated back of a taxidermy fox, its tail approaching the hinge of an outside door. Except its front paws, the shadow cast by the lowered sun reveals the rest of its body, its open mouth, its fake teeth. And a caption: “Engineering the drama.” The first image of a work in progress. “The eyes are killing me,” Driton writes me. Then a second image, the next day. A shot of the same fox, lying on its back on a blanket, open mouth, with red-and-black wires protruding from its eye sockets. Some more yellow wires in the upper left corner, part of the sleeve of a grey pullover in the upper right – the taxidermist at work? Again, the same caption: “Engineering the drama.” – “Can’t this be the poster for the show?” – “I don’t know. Why not. This could be it. It’s a very very heavy image.”

A few months before, Driton sent me the slightly bewildering sketches of three new works. “These are new works. I don’t know where they came from. Can you make sense of them?” I tried to ask him where they came from, what they meant to him, but he only gave me their titles: Romeo, Call it fate, call it karma, and The importance of being a fairytale. “Yes, these could be an exhibition,” I responded instinctively. And so, a few weeks ago, nearly in passing, the theme of the exhibition that I was supposed to curate: “Engineering the Drama.”

Maybe first: which drama precisely is engineered in Driton’s first solo exhibition in Albania? The drama of sovereignty. All three works allegorize, in different and oblique ways, the position of political power, drawing perhaps even – may I humbly suggest – the coordinates of contemporary power in Albania. At the same time, each in their own way, they recall certain tragic tropes – from Shakespeare to Sophocles and Lars von Trier.

Romeo consists of a bundle of blackthorn branches, held together at the base by a red paint roller grip. This untouchable paintbrush immediately recalls the notorious fasces, the bundle of branches carried by a Roman magistrate’s personal bodyguard in order to open the way for him wherever he went. Outside the traditional boundary of capital, the fasces were bound together with a securis (axe), signifying the power to punish by death. This symbol of political power gained a second life as the emblem of the Italian fascist regime and actually forms the basis of the urban layout of Tirana, with the fasces being the Bulevardi i Dëshmorëve të Kombit, and the blade of the securis the Qemal Stafa stadium. In contrast with Tirana’s city plan, in Romeo the axe is absent, signaling that we are not outside the capital of Rome (as during the fascist occupation), but inside the capital of the sovereign state of Albania.

The title, however, suggests a completely different story, namely Shakespeare’s tragedy of the strife between the Montagues and Capulets fighting for control over the city of Verona, and the illicit love between Romeo and Juliet. We may only wonder who the Montagues and Capulets of our times could be, and what romances are hidden behind their superficial political enmity. But blackthorn plums only make you feel like choking, so perhaps, in our alternative world, Romeo actually survives the end of the play, reanimated from a misplaced dagger wound in the corridors of the American Hospital in Tirana.

Romeo’s further adventures are related by Call it fate, call it karma. We see a single shoe which neither foot may fit as a converging point of two legs in a pair of yellow trousers, impossibly sharing the same piece of footwear. Not only is this constellation painful to imagine, it also suggests a completely impractical and useless situation: neither left nor right, this post-ideological “centrist” shoe turns out to be a risky balancing act in brightly colored trousers.

Like the fasces, the symbol of painful and deformed feet, in this case caused by the intransigent shoe, is another frequently occurring allegory for the political, if we remind ourselves that this is precisely the meaning of this other character, King Oedipus (literally, “swollen feet”). As an infant, Oedipus’s ankles were pierced and bound together – made into a single left–right foot – to prevent him from crawling around. None of this, however, has prevented him from later killing his father and marrying his mother, thus bringing the plague upon Thebes. So perhaps the artist will allow us to rename Call it fate, call it karma “Oedipus’s shoe,” as one monstrous abbreviation of a sovereign career gone wayside.

The third work, then, The importance of being a fairytale is perhaps the most explicit of the exhibition, as it features that most political of animals, the fox. In chapter XVIII of his treatment on the sovereign, entitled “How princes should honour their word,” Macchiavelli wrote: “So as a prince is forced to know how to act like a beast, he must learn from the fox and the lion; because the lion is defenceless against traps and a fox defenceless against wolves.” But this fox’s tail is trapped between the door, preventing it from moving on, exploring other parts of its realm, the exhibition space. The room that it was about to enter is dark, with the only light in the room entering through the crack of the door.

Halfway through another (albeit inverted) Oedipal fairytale, Lars von Trier’s film Antichrist, an exasperated Willem Dafoe finds a fox in the woods disemboweling itself, while whispering “chaos reigns,” thus announcing the apocalyptic unfolding during which Dafoe, his leg pierced and bolted to a grindstone, finds out that his deceased child had always been wearing its shoes the wrong way around. In The importance of being a fairytale the fox didn’t rip open its own belly, but, like Oedipus, gauged out its own eyes. It is blind, and cannot even see that it is stuck in the dark. The lion, meanwhile, is nowhere to be found – outside the gallery perhaps? Not that he would be able to get the fox out of its trap…

The question that remains is: which is the fairytale that is so important? The allegory of the powerful sovereign with his paintbrush loaded with pain, or this stuck, lonely fox, bereft of eyesight, projecting two brightly colored spots on the wall, delivered to the wolves? 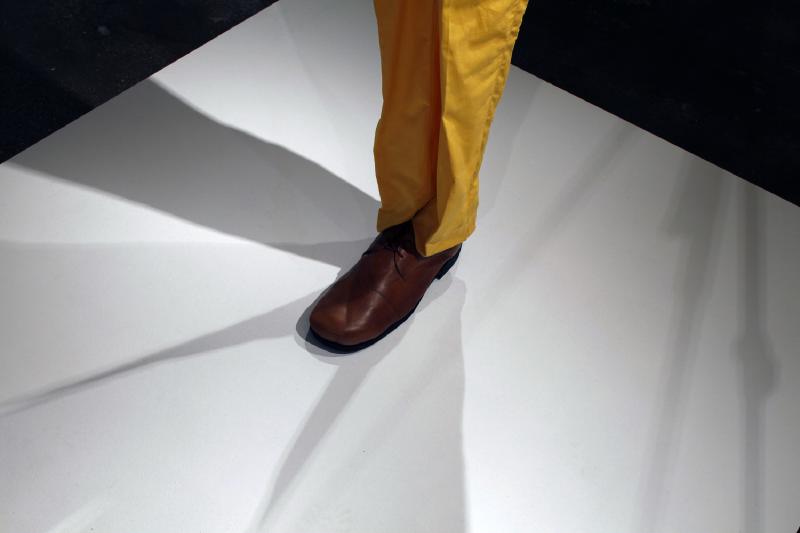 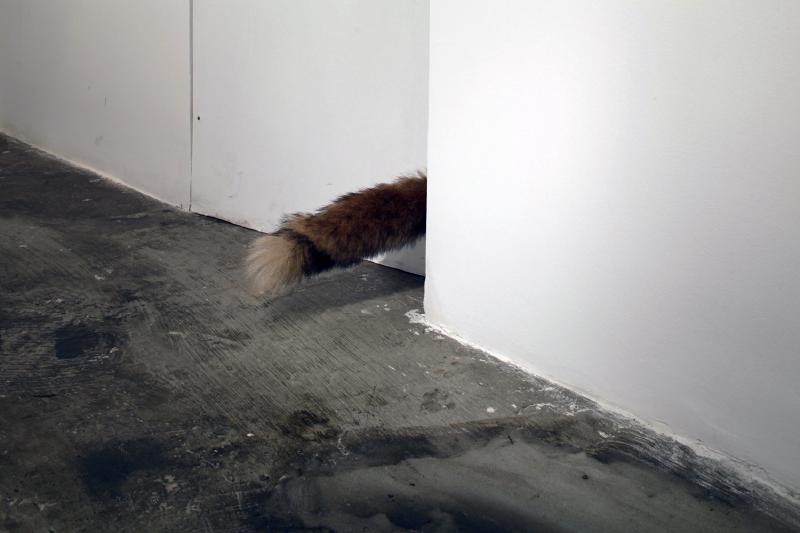 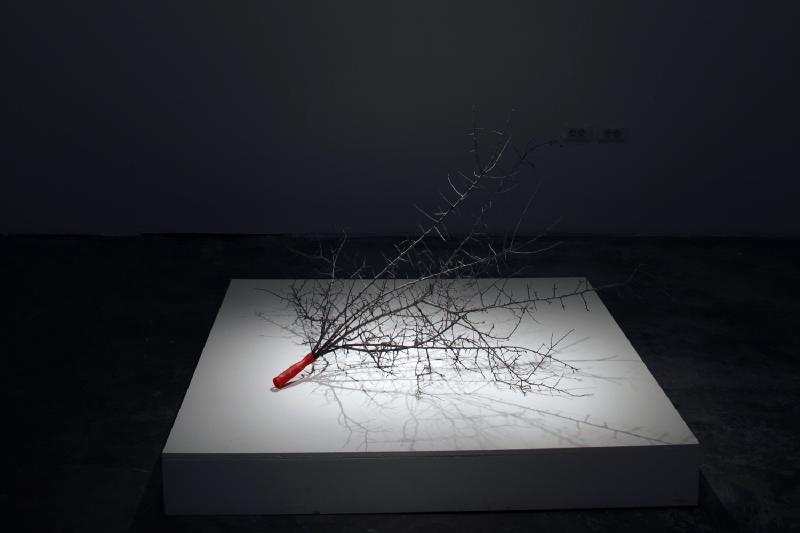 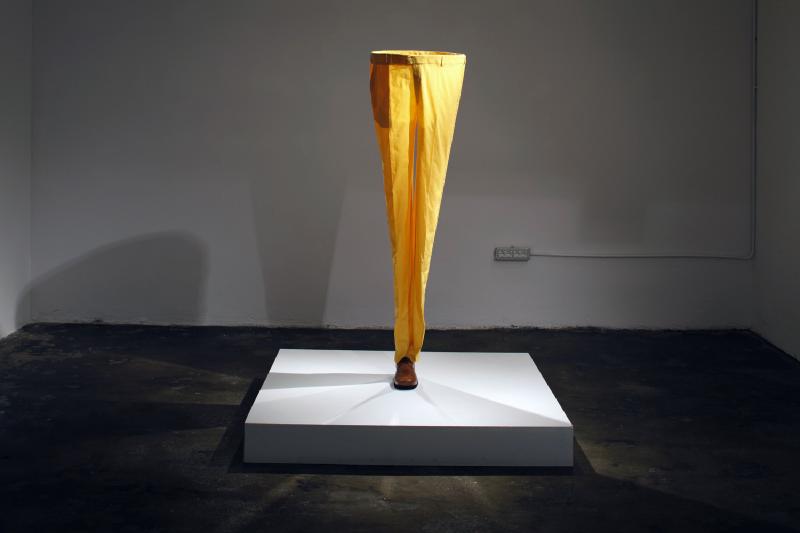 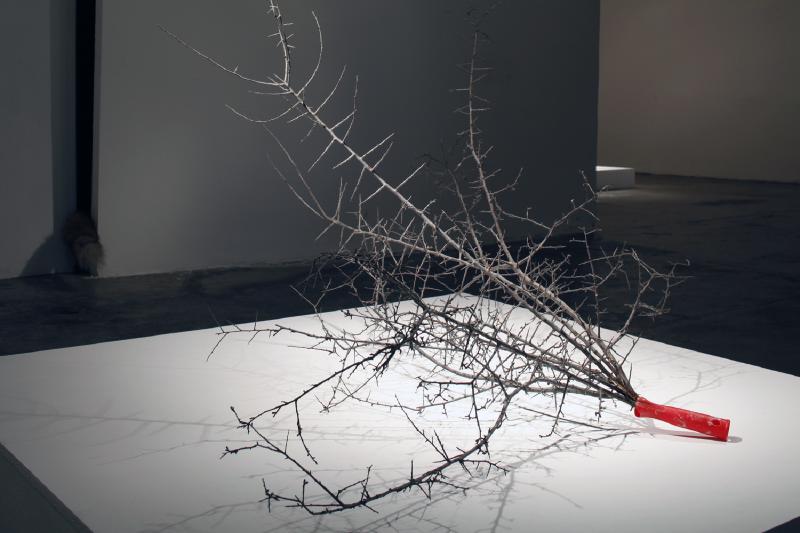